The Dooars belonged to the Kamata Kingdom under the Koch dynasty; and taking advantage of the weakness of the Koch kingdom in subsequent times, Bhutan took possession of the Dooars. This region was controlled by the kingdom of Bhutan when the British annexed it in 1865 after the Bhutan War under the command of Captain Hedayat Ali. The area was divided into two parts: the eastern part was merged with Goalpara district in Assam and the western part was turned into a new district named Western Dooars. Again in the year 1869, the name was changed to Jalpaiguri District. After the end of the British rule in India in 1947, the Dooars acceded into the dominion of India and it merged with the Union of India shortly afterwards in 1949.

The native people of this region generally have Mongoloid features. They are composed of numerous tribes, including the Bodo in Assam, and the Rabha, the Mech, the Toto, the Koch Rajbongshi, the Tamang/Murmi, the Limbu, the Lepcha in Bengal. Most of the people found here are Nepali community . Apart from the tribal population, a large Bengali population (mostly displaced from the then East Pakistan (now Bangladesh) by the Partition of Bengal) also populate the Dooars and their culture emerged with local people.

The Dooars are famous for the tea gardens which were planted by the British. For working in the gardens, they imported labour from Nepal and the Chota Nagpur and Santhal Parganas. The Oraons, Mundas, Kharia, Mahali, Lohara and Chik Baraik are the tribals from these areas. The tribal of Chotanagpur origin are employed in tea gardens, which started production during the 1870s. Before the settlement of other communities, these people converted the forests into villages and busties (agriculture village). The remnants of these tribal people form a majority of the population in Western Dooars.

The word Tinchuley Jhalong, The hill station is very near the Indo-Bhutan border on the banks of the Jaldhaka River, on the way to Bindu. Jaldhaka Hydro Electricity Project on the Jaldhaka River is a major attraction in this area. Bird lovers can enjoy a varied collection of hill birds as well as migratory water fowl here. 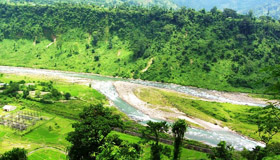 Samsing, is a small hill village and tourist spot in the Malbazar subdivision of Jalpaiguri district of West Bengal situated at an elevation of 3000 ft in the foothills of Jalpaiguri and Darjeeling districts border. It is known for its beautiful landscape with green tea gardens, hills and forests, which attract a lot of tourists. It lies 18 km from the Neora Valley National Park. 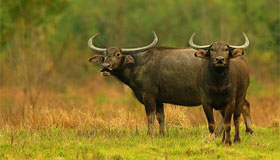 It is the home of more than 2500 people. Its climate is noted for fog and cool breezes and a high rainfall. SamsingIt has lots of beautiful picnic spots and tourist place. Some of them are Lali Guras, Rocky Island and Suntaley Khola. Neora Valley National Park is in a distance of an hour from here. Here you can find the fusion of hills, plains, rivers, forest, tea-garden and villages. In fact,it is a cute tea garden inhabited by lovely and helpful nepali people. Many local people are associated with tourism / tea / timber - related businesses. Samsing is a progressive place as the people have always valued education and their cultures. The early settlers in this village as a tea plantation labours were two people one from Rangeli, Sikkim and other from Nepal Mountain region. They left their place when they heard the legend that in plane people pluck the money. It grows on tea plants.

Gorumara National Parkis a National Park in northern West Bengal, India. Located in the Terai region of the Himalayan foothills, it is a medium-sized park with grasslands and forests. It is primarily known for its population of Indian Rhinoceros. The park has been declared as the best among the protected areas in India by the Ministry of Environment and Forests for the year 2009. 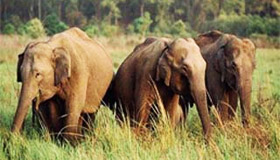 Gorumara was a reserve forest since 1895. The park was declared a Wildlife Gorumara National ParkSanctuary in 1949, on account of its breeding population ofIndian Rhinoceros. It was declared an Indian National Park on January 31, 1994. Originally as small as 7 km², Gorumara has grown by incorporating neighboring lands to about 80 km².

The park is located in the Malbazar subdivision of Jalpaiguri district, in the state of West Bengal in India.

The nearest airport is Bagdogra, connecting Kolkata, Delhi and Guwahati.

Siliguri is the gateway to the Dooars. Cooch Behar, being the headquarters of the North Bengal State Transport Corporation, is well â€“ connected by long distance bus routes to Siliguri as well as Kolkata, Jalpaiguri, etc.